Riding Around the Santa Monica Airport, Thinking of a Green Future 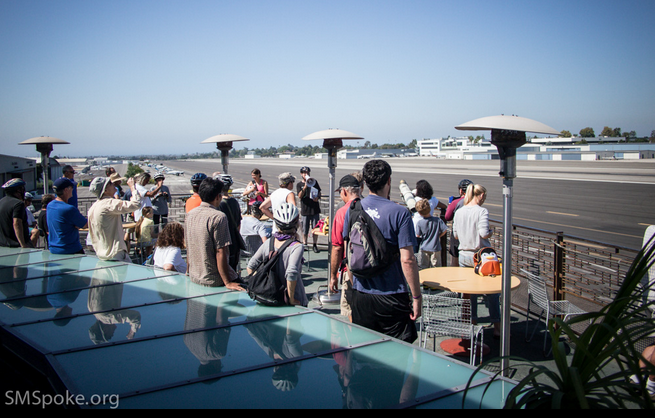 Riders listen to Frank Gruber as planes and jets idled and landed. All images via Bryan “Orange” Baretta/Santa Monica Spoke. For more pics from the ride, click here.

By design and by coincidence, it was a day of contrasts.

On one hand, you have a group of roughly fifty advocates riding bicycles, many of whom are involved in local civic organizations snaking in a pattern across the outside of an airport, occasionally listening to Loyal Marymount Professor Michael Brodsky, Santa Monica Spoke leader Cynthia Rose or community activist and lawyer Frank Gruber, one of the co-chairs of Santa Monica Airport 2 Park. On the other, you had airplane owners and renters flying high above the community, maybe taking in the view of the city. Maybe just flying by.

On one hand, you have a small park, teeming with children playing, families picnicking, and soccer teams racing towards the goal. On the other, you have a gigantic airstrip in the middle of a mostly residential area, that happens to share a fence with the aforementioned park. Brodsky estimated that there were 250 people at the park, at 10 in the morning, when the ride began. By contrast, there would be about 500 people total that would use the airport in some way, shape, or form.

One one hand, you had the smiling advocates politely moving out of the way of automobile traffic accessing the airport. On another, you had a mazaratti driver smirking at and complaining about the rabble in his way as he and his daughter (girlfriend?) drove past.

Yes, it was a day of contrasts. It was also the start of a serious campaign to change the way the Santa Monica Airport is used by and for the community. In the words of Rose, “This isn’t a protest, it’s a discussion.”

Brodsky and Gruber played the roles of good cop/bad cop throughout the half-dozen-stop tour of the airport. Brodsky lamented the environmental and social costs of so much public land being used for the least sustainable type of transportation while Gruber outlined a plan of action to bring about change and gave an abbreviated history lesson on the aiport. Over a dozen times, they were interrupted by aircraft noise that drowned out their words, despite each of them using a megaphone.

But the brewing battle over the Santa Monica Airport’s future is more complicated than a simple 99% vs the 1%. Yesterday’s crowd wasn’t a collection of motley advocates that you would expect to see at Critical Mass. I would estimate the median age of riders was in the 40’s or 50’s and included lawyers, a City of Santa Monica Planning Commissioner, middle class families, and even an airplane owner.

Read more at Santa Monica Next

Yes, bike riders are subject to the same laws drivers are. Maybe Santa Monica police and prosecutors wanted to send that message loud and clear. Maybe they wanted to make an example of one reckless cyclist so other bicyclists would straighten up and ride right. But to do it, they slapped a reckless, red light […]
Just because Santa Monica is officially bike friendly doesn’t mean everyone there is. Even the ones you’d think would get it. For all its progress in recent years, there are still significant issues biking — and parking your bike — in L.A.’s city by the beach. As Gary Kavanagh has pointed out, bicyclists are officially banned from […]
Recently, cyclists are finding themselves being ticketed for not having a license on their bicycle.  This has lead to outrage in the community from some, the bicycle licensing laws are meant to help recover stolen bikes not harass the people on them, and confusion from others.  It seems a lot of people don’t even know […]
Behind the May 20 opening of the Expo Line to Santa Monica lies the untold story of dozens of dedicated volunteers who worked for decades to make this line happen. Few people know that Expo Line light rail was a glimmer in the eye of Santa Monica city officials as early as 1989. That year they convened […]
The day Los Angeles transit enthusiasts have been waiting for finally arrived this morning when the 6.6 mile extension of the Expo line opened, bringing passenger rail back to the westside of L.A. County for the first time since 1953. Opening festivities continue tomorrow with celebrations at five of the seven new stations and a celebration […]
Map by Barbara Fillet showing proposed Agensys route in blue and alternatives in other colors. A heated debate has broken out in Santa Monica casting cyclists and the City Council against a proposed research complex by Agensys, a biomedical engineering company.  According to Santa Monica’s much ballyhooed Land Use and Circulation Element (LUCE) to their […]