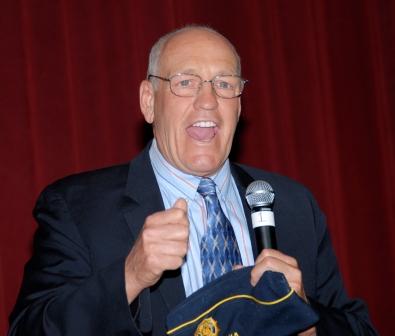 Who Cares What This Guy Thinks?
In their rush to cover the news (broken last night in an excellent piece in the Times) that the Mayor is ignoring the wishes of the City Council and local councilmen, the mainstream media is downplaying the opposition to the Mayor’s plan to remove parking, synchronize lights and promote traffic flow on Pico and Olympic Boulevards.
Fox, the LA Business Journal and NBC are all running with the AP story on the mayor’s move which marginalizes the near unanimous opposition of the community groups, business groups, business owners and residents along the corridor as "some opposition." The AP story takes the Mayor’s word on the benefits of the project, and ignores the controversy created by a Mayor bulldozing opposition and the public process. There is no mention of the thousands of people that have shown up to hearings and public meetings, that testified and signed petititions in the time between the plan’s surprise announcement and yesterday’s decree that "the council did not have jurisdiction over such issues as parking regulations or whether streets were one-way."
The Times gets it right, repeatedly going back to the breadth and passion of the opponents to this plan. The story here isn’t just that the Mayor has a new plan to fight traffic, the story here is also that neighborhood councils and councilmen don’t have any power to influence what happens on their streets (according to the Mayor’s office.)
While the community will doubtless fight on, lawsuits are already in the works, the other big loser is Counciman Bill Rosendahl, an outspoken critic of the project who saw the concerns of Councilman Herb Wesson addressed (the plan no longer extends all the way from Santa Monica to La Brea, it now stops at Fairfax) and his own ignored.
And what were Rosendahl’s radical ideas that were so revolutionary that they couldn’t even be considered? Rosendahl asked that the Department of Planning work with LADOT and the community to address the community’s concerns before the plan was implemented.
Yesterday’s power play by the Mayor marks the end of the pretense that the city and the community is working together to make the best plan possible for everyone.
You can check back with Street Heat for full all of the latest coverage as the controversy enters its next stages.
For previous coverage of the Pico/Olympic plan, click here.
Image from PR Web.

I may not be thrilled with the reasoning, but each of the last two evenings one of the two finalists for the Fifth District City Council race attended one of the LADOT’s open meetings and voiced opposition to the project in it’s current form. Reporting on last night’s meeting, Ted Rogers, of BikinginLA fame writes […]
When an angry mob of westside business owners descends on city hall it can mean just one thing…it’s time for another hearing of the Mayor’s Pico/Olympic Plan. Yesterday, the City Council’s Transportation Committee picked up where they left off last December to listen to LADOT and the local business owners tell two different stories of […]
When I first read that the Los Angeles Department of Public Transportation was holding public meetings this week on a revised Pico-Olympic Plan, I got nostalgic.  Covering the battle between the community and the city over the plan to remove rush-hour parking, restripe the roads and retime the signals was the signature story back at […]
The LADOT used project boards instead of a presentation to spread the word. The more I think about the LADOT’s new plan for the Olympic-West Pico-East project the more I think they may have gotten things backward.  Starting last night, the LADOT began a series of public meetings to provide the public input on "scoping" […]
A View from Olympic Boulevard at Dusk February’s "Done Deal," that was later left for dead after a court ruled against the Mayor two months ago, is once again very much alive.  Today the city council approved a resolution outlining how the city should conduct a full environmental review of the "Olympic West Pico East […]
Maybe it’s not such a "done-deal" after all. Mayor Villaraigosa and Councilman Jack Weiss, the two elected proponents of speeding up traffic on Pico and Olympic Boulevards at the expense of local businesses and non-motorized travel, were dealt a setback yesterday when a Los Angeles County Superior Court Judge ruled that the city needs to […]