We might want to remember that Levi Strauss & Company is a clothing company which follows fashion trends while indeed playing a role in the creation of trends.  The above Levi’s Commercial in which an internal-combustion-powered vehicle is apparently allowed onto the trading floor of a major stock or commodities exchange in New York City actually propelled Steve Miller’s song “The Joker” to the number one spot on the UK charts in September of 1990, some 16 years after it was released in 1973. Powerful stuff that sturdy fabric from the city of Nimes in France.

It is however is no joke that Levi’s has opened a “pop-up” “commuter workshop” in Downtown Los Angeles, rather than a more traditional location for such Brigadoon-like ventures such as Melrose. Even choosing Downtown, one would expect to see this pop-up around the established shopping crossroads of 7th and Figueroa, not just east of Broadway but by golly east of Spring on 5th! To think that 15 years ago many thought Tom Gilmore was nuts for planning hotels in “Skid Row.”

The workshop is really more of a corporate-sponsored Bicycle Kitchen with places to repair the iron steed of course, but also space to socialize or even get your torn jeans repaired by helpful seamstresses (well, they were all female last night!). Of course, you can also test ride a Tokyobike or peruse the Levi’s Commuter clothing line which is aimed at bicycle users.

Last night anyone who RSVP’d in advance (and was over 21) was able to attend a well-produced presentation arranged and moderated by Aaron Paley of CicLAvia on the future of our public spaces entitled, “The New Streets of L.A.”  The event was packed to capacity, despite the unfortunate, and IMHO unnecessary (did beer really need to be served?) age restriction.

-Avital Shavit of Los Angeles Metro, where she works on bicycle programs

Yes, Seleta Reynolds, the new General Manager of LADOT really did make her first public appearance after her confirmation in Los Angeles at a bicycle-themed event.

Although she did remind us all that she does not officially start working for the city until next Monday.

Still, do you think Ralph Dorsey ever addressed a gathering of bicycle users and pedestrian advocates in his free time?

Reynolds regaled us with images of what had been in America (specifically a lively Detroit of the 1920’s) followed by the somewhat cliche example of General Motors’ Futurama which encouraged the U.S. (and also the Canadians apparently) to separate out road uses.

This led to the exclusively car-infested streets devoid of pedestrian and bicycle use that so many of us became accustomed to. She ended with a picture of present-day Market Street in her former workplace, filled not only with Electric Trolleybuses, a Peter Witt streetcar from Milan but, most prominently, a throng of bicyclists.

In the later Q&A portion, she observed that Los Angeles had a greater amount of philanthropic advocacy than the Bay Area, and she hoped to capitalize on this. Her parting line? “Change is constant when it comes to streets, and there are no rules that we can’t rewrite” 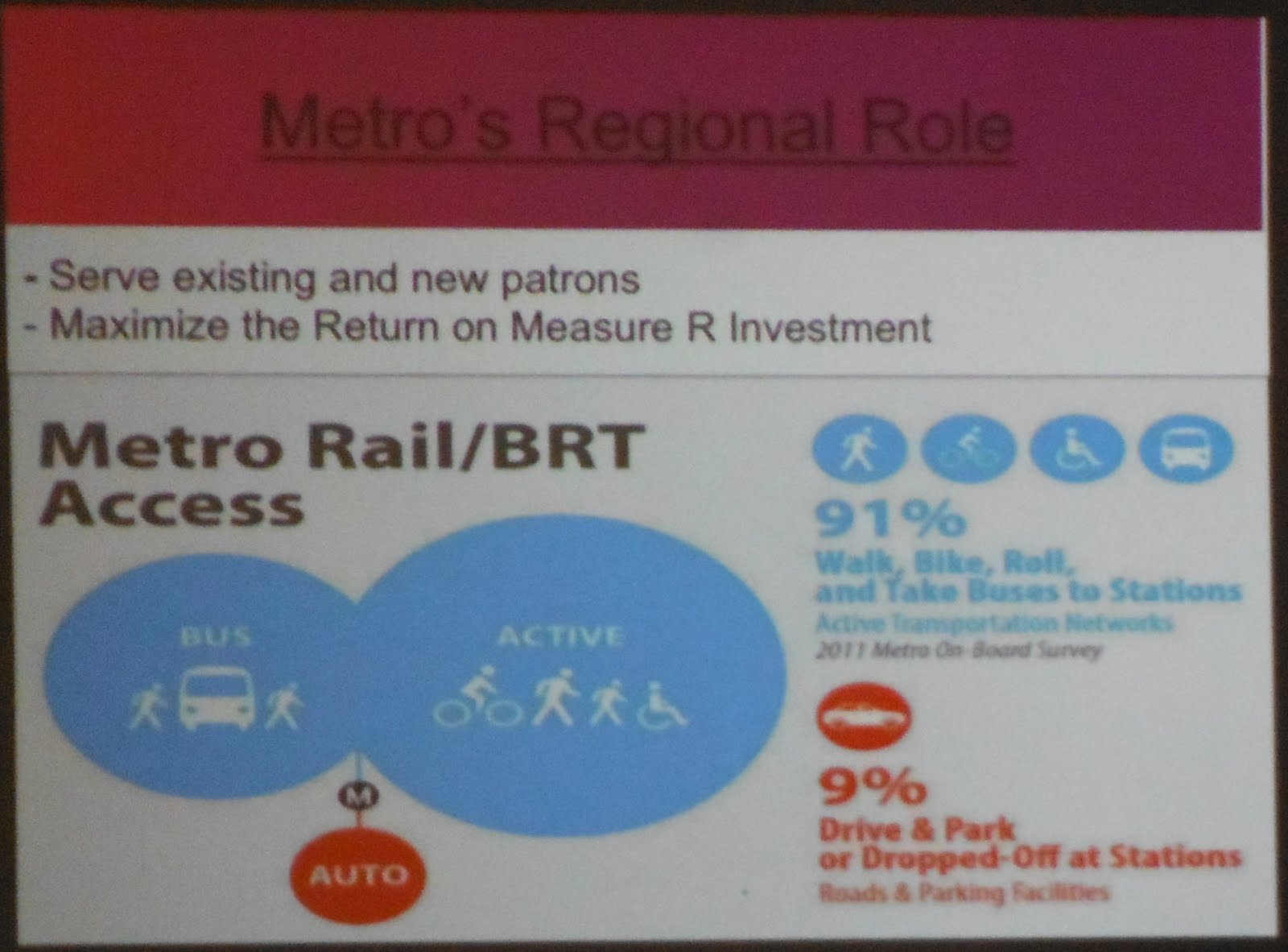 Avital Shavit of Metro explained how after surveying the users of their rail transit lines (and the “as good as rail, only cheaper” Orange Line) Metro found that 91% had reached the station on foot, wheelchair, bike and bus. Only 9% parked their car at a station.

Jen Klausner, who was able to make the first presentation with amplification, gave us an overview of what the Los Angeles County Bicycle Coalition has done to where it can go with the continuing support of its members. Bicycle counts are a vital piece of the data puzzle in creating a city where one mode does not dominate over others, as has been permitted in the past. It is the LACBC bike count data and work with the city that has fostered so very many of the dramatic changes seen in recent years.

Deborah Murphy of Los Angeles Walks was as relentless as always. She reminded the audience that, while walkers are 22% of mode share in the city where “Nobody Walks”, they are 39% of traffic fatalities. Even when combining money set-aside for bicycle and pedestrian infrastructure, “active transportation” gets less than 1% of funding. She reminded us that CicLAvia is also a walking event, and left us with Louis Kahn’s observation that “the street is a room by agreement.”

Last to present was Tafarai Bayne, who explained what the impact of changing pedestrian and bicycle policies and attitudes meant for South Los Angeles.

He reminded us that change for these communities had not always been beneficial and that it had to be implemented with first-hand experience, rather than via a GIS program created at City Hall. Bayne also discussed how presently-open lots were being re-imagined so that they might become more useful places to their neighborhoods in the future, including housing. He warned us of the potential trend of rich-door/poor-door development and closed by saying, “If we can’t build places where [all economic classes] of people can hang out, we’re done.”

What I took from this presentation and the follow-up Q&A was a sense that Los Angeles is about to make a major transition in the way it thinks about its mobility and its streets. I suppose we who read Streetsblog Los Angeles know that already, but when the incoming head of the agency that created so much of the environment (and inspired other municipalities to do likewise) says the rules are going to be changed, hold on tight.

Ford has spent the last few years fretting about how to reach out to Gen Y. The car company made news earlier this year when it re-designed its 2015 Mustang to appeal to buyers born between 1980 and 1999. (Apparently Gen Y just screams “shark-nosed grille and round headlights” to Ford.) Last year, Ford turned to […]
This table, showing the top 10 U.S. cities where cycling is growing fastest, comes from a new report from the League of American Bicyclists that analyzes census data. Though the census only tracks bicycle commuting — and thus understates how many people are cycling — the results tell an interesting story about cycling trends. Notice […]
As soon as some consensus emerges about a demographic trend pointing to positive signs for cities, you can count on leading suburban crusader Joel Kotkin to say the experts have it wrong. Kotkin would like you to believe that he’s the one true voice in demographic trends, and in his view, it’s always the suburbs […]
One of the beauties of the Streetsblog Network (now with 411 members) is that it gives us a pavement-level view of what’s happening in communities that are mostly glossed over by both mainstream media and what might be termed the mainstream blogosphere. Places like Sioux Falls, South Dakota. You might not think of Sioux Falls […]
As report titles go, you could hardly get less sexy than “NHCRP Report 750: Strategic Issues Facing Transportation, Volume 6: The Effects of Socio-Demographics on Future Travel Demand.” But buried within this wonky new document from the Transportation Research Board are ideas that can — and should — upend the way local, state, and federal […]
Live the dream. Photo: Mr. Rollers via Ingrid Peterson/Flickr There’s an interesting piece in today’s Los Angeles Business Journal by Richard Risemberg on the economics of the Bicycle Boulevard and why the city needs to begin installing them immediately . While it’s trues that Risemberg is a bike partisan, he writes the excellent Bicycle Fixation […]