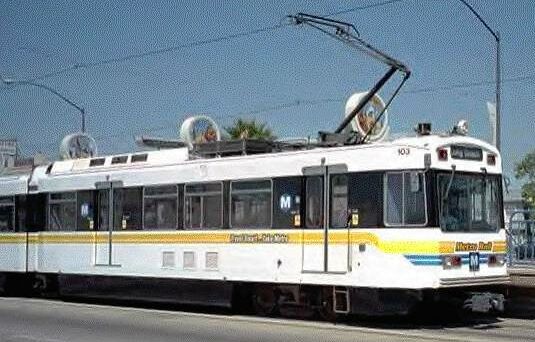 Just because I’ve been writing about bikes and development, doesn’t mean that Metro hasn’t been busy with a myriad of different rail and light rail expansion projects. In addition to the Subway to the Sea and the Expo Line, both of which have been talked about extensively on this and other blogs, Expo is also looking to add light rail along the Crenshaw Corridor and to connect the Gold, Blue and Expo lines in LA’s downtown.

This week, Metro began holding hearings to update the public on the agency’s Crenshaw-Prairie Transit Corridor Study. The Santa Monica Daily Breeze reports that Metro has picked a preferred alternative for the project. The new light rail would connect the Expo Line to the Green Line, and pass within a mile of Los Angeles International Airport. The line will run along existing track through an industrial area of Inglewood and not through the heart of the downtown. Unlike Phase II of Expo or the Subway to the Sea, there are already some funds set aside for the project.

Next week, Metro will be holding similar meetings for the Regional Connector plan as it had for the Crenshaw-Prarie Plan. According to the press release, Metro has identified some potential alignments and station locations for a more detailed technical analysis. People interested in seeing and commenting on these alignments will have their chance at two public hearings:

Yesterday, the Bottleneck Blog publicly released the changes to Metro’s Long Range Plan that will be voted upon by the Metro Board at the end of the month.  Steve Hymon noted that there were many changes to the timelines to complete projects, and many of them weren’t acceleration notices.  Below is the timeline, with various […]
Stay tuned to this link for more on the Metro Board Meeting. 9:38 – The Metro Board meeting is already in full swing, and they came out hot with Supervisor Mark RMetidley-Thomas introducing his motion to grade separate the Crenshaw Line from 48th Street to 59th Street and to include a station at Leimert Park.  […]
The Source had barely published its story highlighting the Metro Board’s decision to approve the environmental certification of a Crenshaw Light Rail line that may or may not have a Leimert Park Station and definately runs at-grade through the Crenshaw communities’ top retail corridor when I caught up to Damien Goodmon, the head of the […]
Running heavy rail on the West Santa Ana Branch could be cheaper, faster, higher-capacity - and a win-win for communities the line will serve.
Last week, Move L.A. convened its annual transportation conversation conference under the banner of “Imagining Measure R2.” The daylong conference was profiled in the L.A. Times and at the Source. Today SBLA takes a look at Move L.A.’s “strawman” R2 proposal presented that day. It’s a draft for purposes of discussion, very likely to change […]
At a press event earlier today, Mayor Antonio Villaraigosa announced the opening date for most of Phase I of the Expo Line.  The line will begin service on Saturday, April 28 from Downtown Los Angeles to  the La Cienegs ia/Jefferson station.  Phase I will be completed when a station opens in Culver City at an […]